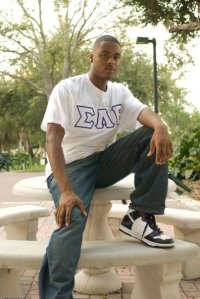 “What’s the coincidence that I have mother who encouraged me in all these ways? I think all of this was planned out. Everything I’ve ever needed to go to that next level as far as connections and people I’m intertwined with – I don’t take any of it for granted.”

“Acting is the one thing that brings me joy, brings me happiness. Regardless of whats going on in my life, in that moment, its just pure happiness. [My mom] wasn’t supportive of me majoring in theater, but she motivated me in seeing her pursue her passion. She was happy with what she did, she enjoyed it. Seeing her have that joy made me want to have that joy in my life.

“My step-grandfather really motivated me in acting. [When I was in high school,] he came to one of my plays. I remember he was crying. He was saying, that’s how much I touched him. And he said for me to go on stage and bring that out of him, that’s a gift. He sat me down and was telling me that this is something that God gave me. He said I should pursue this and I can do this. That’s the same performance that won my mom over to saying I should pursue theater as a major.

“When I came to Miami and did my first audition I got three callbacks, as a freshman. Not only get called back but for three different plays? I was so worried that I would be stereotyped as a black actor. But I realized, wow, so I am talented! Being there, that’s what showed me that I had some dancing talent and some singing talent. The professors were like, “You know what? Keep at it. You’re good.” I can actually hold a note. I may not be Usher but I can do this thing.

“Miami was really like a crash course in what the acting world is like. I learned the most and gained the most confidence. I could have gone there and crumbled amongst people who I thought were better looking than me, better actors, better dancers. But if these people who didn’t even know me believed in me, I could do it.

“My mom helped mold that creative side of me. She made me more sensitive. I was raised by a woman. I was more in tune with my feelings, I wasn’t afraid to express them. She made me pay attention to details. All those things make a good actor. You pay attention to details and aspects of emotion. Her encouraging me to put on plays when I was little and perform for her and sing for her – just her raising me – it gave me that raw talent that school just trained. My mother also instilled religion in me as far as being in touch with God and my gift. I do realized it’s a gift given to me. I could lose it any day.

“What’s the coincidence that I have mother who encouraged me all these ways? A prophet came up to my mom and told her that her child was going to be successful in the world of entertainment. My mom never told me that; my aunt did when I was trying to decide if I should major in theater. I think all of this was planned out. Everything I’ve ever needed to go to that next level as far as connections and people I’m intertwined with – I don’t take any of it for granted.”

Cornelius will be playing the part of Brother Joel Boxer in The Amen Corner here in Atlanta from October 22-24. You can get your tickets here.

One thought on “Cornelius Jefferson | Actor”