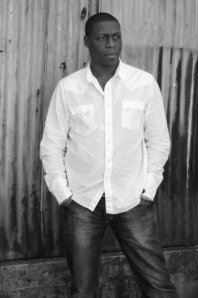 “Part of my growing up was living in a bedroom with three brothers. It was just full of music all the time. I was a little kid just watching them… As time got later on, we more seriously collaborated. We kind of bounce ideas off each other and we share things with each other… Musically we’ve always worked together.”

“I was born in London, my parents are from the Caribbean. My father is from St. Lucia, my mother from St. Vincent. I’ve always had two loves in life; my first love is electronics, my second is music.

“My father was a builder. He bought this house, then he built four extensions on it because I have three brothers and  two sisters. Part of my growing up was living in a bedroom with three brothers. It was just full of music all the time. I was a little kid just watching them.

“My younger brother owns a label in London called Tribe, so we kind of bounce ideas off each other and we share things with each other. My eldest brother, he got to the stage where he just left music and he was doing his own thing. My older brother Wesley, we did some parties together in London. We used to do local pubs and stuff when I was really young. As time got later on, we more seriously collaborated and as my younger brother got older, we started collaborating more. Musically we’ve always worked together. He’s a sense of encouragement as well. Its not unusual for us to talk for hours on a weekly basis.

“My eldest brother’s influence was reggae, the other was soul. I got influenced from both. I was always interested in electronics as well. I was fascinated by how things worked. Coming from the Caribbean, the influence was playing on your own sound system. After a while I wanted to start my own sound system. I built my own turntables and made this mixer. The first speakers I had, I built myself. I built an amplifier as well.

“In the mid-to-late ‘80s, I started a sound system called Shock. It was three other friends and my younger brother. We were quite successful. We did Notting Hill Carnival for about twelve years straight. We had followings of like four to five-thousand people. People used to come and just listen to us.

“I got asked to play in northern England quite a lot. After we would finish our set, they would ask us to play this House music. After a while we started playing it in London. We used to call it Garage music. The original Garage music was more soulful, and then it got more into D&B [Drum & Bass], but it was actually House music. So then we started playing House music in London. House music really started in London in the mid ‘80s, early-to-mid ‘80s. In London everyone was playing James Brown, a lot of soul, and a lot of really obscure type music. It was an eclectic scene.

“[In about ‘91] the sound system got stolen. I thought “Should I carry on, what should I do?” I decided to keep going but just rent the equipment. We started to get a name for ourselves. A lot of the top acts came out in London in the House scene. So after the equipment got stolen, I focused more on my career. I was talking to record labels, I had been made a couple offers. But I just thought to myself, there’s too many cut throat people, too many backstabbers.

“So I started working for myself. I wanted to move. This head hunter contacted me, saying “We got offices all over the world.” I didn’t hear from him for 6 months and then he called me and he said, “New York or Los Angeles?” and I said, “Atlanta,” and he said, “What? Why?” and I said, “I like it there,” so he said, “okay.” That was in 2000.

“For the first couple of years I didn’t do anything concerning music, no DJing. When my equipment had gotten stolen, they stole 3,000 records as well. So when I first came to the US, I started buying vinyl again. I did that for about 3 years.

“I got approached by a guy called DJ Be and he said he wanted to do a party together. I wanted to do something classy, something where people felt safe. It could be a place where people would feel comfortable. I thought of a name that had always been in the back of my head – TAMBOR, it means drum ceremony. The thing was I brought too many speakers and they said I couldn’t come back.

“A few months later, Sensei, this spot in east Atlanta, said I could do a Saturday night there. I had planned to do every third Saturday of the month there with DJ Be and Yusef. Everyone enjoyed it, it was Deep House, Afro-Latin House. We got a drummer in there. And then my friend called me and said, “Have you heard about Sensei?” They had gotten evicted. I started calling around places.

“Pablo Henderson, he’s this legend from the UK. I told him I needed a spot because I had already booked this DJ from New York to come down. He said I should do the Mark. I knew he had just re-done it and it was really nice. I said, “You know I do Deep House right?” I decided I wanted to open it up to everyone, all nationalities. So I kept booking big acts with myself as the opener. We’ve started to get worldwide recognition now.”

You can find out more about Stan Zeff at www.stanzeff.com

You can also catch him at TAMBOR, which has earned international and local acclaim, including winning Best Club Event from Creative Loafing Atlanta. You can buy advanced tickets to the event here. For monthly event updates, join TAMBOR’s facebook group.