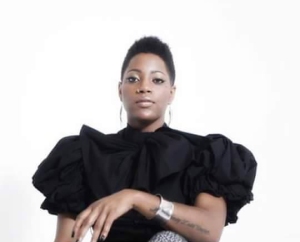 “My mom was a big influence on me; she set the example. She never allowed herself to stay in a situation that didn’t serve her. My dad was equally influential with his understanding and his patience. I’m a college graduate and want to be a rapper for a living… he respects my need to make art.”

Elsie, what greatness do you bring to the world?

“I am an artist. My medium is the English language and my frequency is music. But the bigger picture for me is to assist the younger generation. They’re caught up in technology; it’s sliced out the interpersonal connections.

I was on the train the other day.
Two women were arguing; one woman had thrown the other woman’s stuff onto the train tracks. People were filming; they weren’t trying to help. Why was this film-worthy? Empathy is missing. I’m not saying I’m a master at it, but the necessity is there more than it ever has been before.

All I can tell you is what I’ve been through, how I’ve handled it; maybe that can help you. I’ve learned a lot in the short time I’ve been in this form, on this earth. My culture, we come from a culture of storytellers. We pass tradition, knowledge, verbally. Most time it comes from your elders – it’s passed down and passed down. I’m no different.

I want to challenge people to feel and to think and to emote – to get back into human beings as opposed to just Instagram snapshots. We’re shortening ourselves, putting ourselves into these internet boxes.”

Who made you great?

“My mom was a big influence on me; she set the example. She never allowed herself to stay in a situation that didn’t serve her. My dad was equally influential with his understanding and his patience. I’m a college graduate and want to be a rapper for a living – he might be disappointed but he respects my need to make art.

Mom, she went out on her own when she was sixteen or seventeen years old. She joined the military and traveled the world. She had 5 daughters. She had lots of different partners and lovers and friends – lots of experiences. She continued to be the example; even if that wasn’t the best example to be, she was still an example. And it was honest.

She chose to enrich her life. She never allowed herself to stay in a situation that didn’t serve her. She was manic depressive, bipolar it’s called now.  She was a black woman born in the 1950s, challenged by abuse, challenged by a mental disorder, in a highly racist military environment. She ended up being a RN at the highest rated hospital in Michigan.

Even though she died in 1997, her spirit is not without me, I am not without her. She wasn’t the sweetest, but she wasn’t the meanest either. Even though we were poor, we went to museums, she took us to libraries, and art shows, and camping. There were always ample books and ample experiences. It gave us a balance between understanding one world and another. It was a duality that we were given insight into. How to speak in one world and another. So many people only see their own worldview – we were afforded the opportunity to see the a broader scope. What I appreciate most, is that she taught us to seek out better, to seek out more. You can always try or choose something different. That helps me make the decisions about what songs I write, what shows I do.

My dad saw in her what I see in her now as an adult. He was ten years younger than my mom when they met and married. When she died he was 35 or 36. He inherited these three other daughters, plus his two younger daughters. Never once did he think about walking away.

He’s made tons of mistakes and done countless things I don’t agree with, but he’s never lost his resolve. His tone is always the same. He always challenges me to see the other side. If I call him needing to vent, he listens, and then he says something that makes it all click.

There’s always a different perspective. It helps to think back and see that there’s a different side that I didn’t consider. That makes people more empathetic, more compassionate. You consider being tactful instead of being crass and nasty. You consider being understanding. Not that I’m a master at any of this, but it’s helpful to have it to fall back on.

It was really cool to have a dad that was going to be at my track meets. He was the dad who came through with Gatorade when someone didn’t have one. He was the guy in my life and always has been.”

What’s something we can DO to make ourselves great?

Being present in the moment, taking a moment to reconsider – feeling is a part of becoming who you need to be. You have to feel.”

What’s something we can USE to make ourselves great?

“I recommend the book The Alchemist. Santiago was doing whatever he could. He went through so many changes – there were so many ups and downs and twists and turns. Here we are in life – we can go all the way negative, we can go all the way positive, we can stay right in the middle. We can try to gain a better understanding.  It tells you that story in such a simplistic, easy-going way.”

Want to see Boog Brown perform in person? You’re in luck! She will be touring during the first quarter of 2016. You can stay up to date with everything she’s doing on Twitter and Instagram. You can also find her music on Bandcamp, here and here. In early 2016, be sure to catch her EP The Things I’ve Noticed.